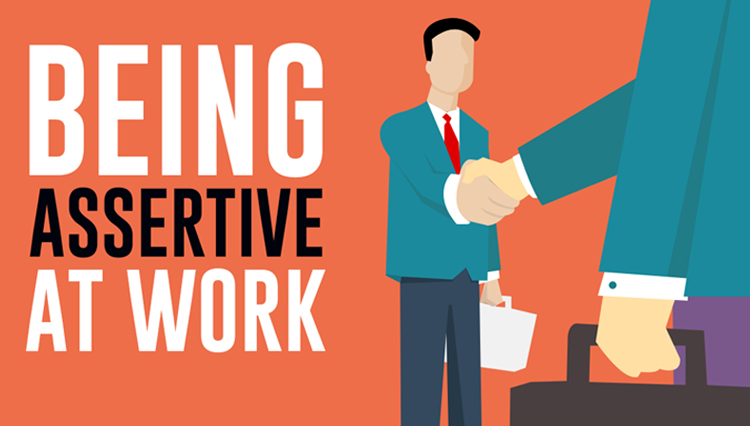 Are you the sort of person who finds it difficult to get your thoughts across during an office meeting? Do your peers seem to steamroll your ideas during a discussion and leave your potentially useful input unattended?

The problem does not lie in what you have to say, it has a lot more to do with how you say it.

Assertiveness is a communication skill that focuses on allowing you to get things done without being unreasonable. The idea is to present yourself in a way that delivers the sentiment of confidence and persuasiveness without compromising on your professionalism and antiquates.

In order to be assertive (instead of showing you what to do) here is list of things, that tell you what NOT to do:

Most people tend to adapt to what is known as a passive approach when it comes to communicating within the office. While the degree to which different people exhibit this form of communication through their words and behavior may vary, the general message behind it can be summed up as “I lose, you win”. When it comes to conflicts at the workplace, passive people will tend to surrender their viewpoints in order to diffuse the situation as quickly as possible.

While, that may be a more mature way of handling things; it is important to remember that somewhere deep inside, we are all just guerrillas beating our chests for territory. Sometimes, a reaction is not required but necessary to establish space and control.

Imagine that it’s almost closing time at the office. You’ve completed all your tasks and are ready to leave for a dinner that you and your friends had planned earlier that day. Just then, your supervisor shows up at your workstation and lays a pile of paperwork on your table. Before you can fully comprehend what to make of the situation, you are told that these are the reports that the management needs delivered to them by the end of the night – and you have to fill them out.

You try to find a way out of this predicament by trying to explain to your supervisor how you have an important commitment that you need to get to but he calmly tells you that it would only take you a few minutes to get them done. He also tells you that he would do it himself, if only he didn’t have to be home in time for his mother’s birthday. Now you start feeling bad for even trying to negotiate earlier on – after all, you were trying to keep someone from celebrating his mother’s birthday! What would you do in such a scenario? If you choose to stick around the office for a few more hours and give up on your own plans, then you my friend, would be exhibiting passive behavior. Why is the situation above unfair? Well firstly, you are being assigned a task that was not a part of your regular schedule. Secondly, the task was presented to you at an odd time; had it been delivered to you earlier, you could have managed to complete it within office hours. Lastly, and perhaps most importantly, you are being presented with what can be considered to be a demand disguised as a request. A request can be turned down without any consequences or further persuasion, but here, every time you try to do that, your supervisor keeps elaborating on how it is up to you to save the day for everyone else – you are being made to feel like you don’t have a choice.

Of course it is important to be helpful and understanding of such scenarios, and at times, it doesn’t hurt helping someone out if you have some spare time on your hands. However, there is a thin line between being compassionate and being taken advantage of.

Another way to consider this scenario could involve you establishing to your supervisor that you would want to help, but you would require his assistance on the task so that the two of you could finish it in half the time and be able to return to your commitments accordingly: Fair game.

That Said, Don’t Be Aggressive Either

Taking a complete 180 degree turn from being passive, some people tend to get aggressive when communicating within the office. Their thoughts and actions emphasize on establishing that “I Win, You Lose”. People who communicate aggressively can be easily identified by the tone of their voice. They will often resort to shouting and finger pointing in order to get their point across through intimidation.

These people have little room for teamwork. They would rather dictate terms instead of making requests and expect others to follow their directions without question. This also means that they would be the first in line to take credit for a group effort when things are going good, but ironically, in the case where the outcome results in failure rather than success, these people would simply blame their peers for their own shortcomings.

Trust us, you don’t want to be this person. It is crucial to neither become the office pushover, nor the office bully

In order to completely understand the concept of assertiveness, you have to first understand the boundaries that make it. Having already discussed the passive and aggressive types of communication styles and behaviors. We now move to certain gray area that is“passive aggressiveness.” To better understand what makes this hybrid so undesirable within the office, let’s take a look at some of their defining traits. people, like their passive counterparts avoid confrontation. However, if they find themselves in one, they tend to swivel their way out by saying things like, “i’m not mad”, “fine” and “whatever” instead of being honest and saying what is really on their mind.

They would rather lose their own battles just to see the other side lose as well. This can make such people highly unproductive for a functional organization as not only would these people hamper the work of their colleagues in the case of a conflict, but also give up on their own responsibilities just to make a point.

Most people do associate with this behavior for reason.s involving minimal drama, but what they need to remember is that in this equation the only person that loses, is them. This is because things unsaid brew resentment and resentment can cause you to be bitter, which is nowhere near the solution.

Being assertive is just about standing up for yourself and should not be accompanied by any undue anxiety. Don’t be afraid to speak your mind but do so in a way that does not threaten the personal boundaries of the other person.

By avoiding the behaviors outlined above, you move closer to your goal, which is:

Being honest and upfront about your needs and emotions and getting your ideas and opinions through to the other person without seeming rude or aggressive.

5 Tricky Phrases by HR Managers and What They Actually Mean