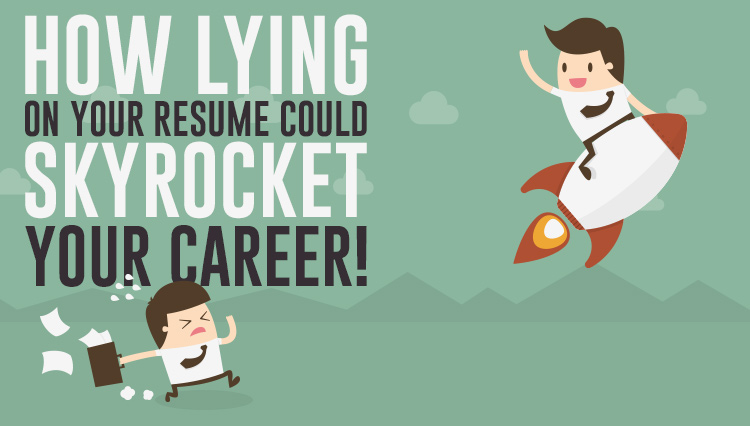 While we are all aware that lying is unethical and can eventually end-up having negative consequences on our lives, some of us just can’t help ourselves! When it comes to resumes, even the most honest people sometimes feel the need to exaggerate their accomplishments, state illicit facts or just simply put, lie. But why shouldn’t we lie on a document which has only one purpose, which is to get us to an interview with a potential employer? Here are some reasons that show why some job seekers willingly lie, or hide the truth (which is basically the same as lying) on their resumes.

Many applicants have unexplainable spells of, well, nothing between certain jobs. This could be due to a variety of reasons – maybe it took longer than intended to find another job to move on to, maybe there was a personal emergency during that part of the applicant’s life, maybe it was just time to take a long due vacation and get some perspective on life. The point being, that for whatever reason, if there is a gap between work experience on a resume, most people tend to cover it up by either fabricating fictional job designations within that time (we’re talking about all you self-appointed consultants out there) or be manipulating the time actually worked at other organizations.

It’s true – no one likes an average Joe (sorry Joe). If your key skill-set revolves around being able to use Microsoft word and browsing the internet like a pro, chances are that potential employers are probably not going to have much use for you. Luckily, you are personally responsible for editing your own resume – all you need to do is make certain…adjustments. Why not start out by stating that you know how to use Photoshop? After all, you probably do know enough of it to edit those killer display pictures for your Facebook account. In fact, why stop there? It makes more sense to add something along the lines of being a part-time photographer as well – after all, you did technically cover your family’s trip to the Northern Areas with your smartphone that one time.

So, you were one of the many digital designers at your previous job. Big dea! No one will take you seriously if you state ordinary thing like that – it would make sense if you slightly altered your title to something a bit more catchy, like the Head of Design. Now that should catch everyone’s attention!

Also Read: The Most Obviously Fabricated Job Titles on Resumes

Now that we have established how easy, and at most times, justified it is to lie on your resume, lets consider any possible downsides to doing so..

Hiring managers are experts at filtering out legitimate information from the make-belief one – that’s their job, literally. Chances are that they will be on to you. Best case scenario, they will not bother wasting their time by calling you in for an interview. Worst case scenario, you will be called in based on the information you provided on your resume, only for them to learn that you made some of those crucial details up. Never underestimate an employer’s ability to get to the truth, eventually!

Now let’s assume that the little white lies on your resume actually go undetected and you manage to get the job. This was, after all, the intention of stating those made-up talents and achievements on your resume – to provide you with a chance to actually do something that is legitimate. Unfortunately, you did kind of oversell your expertise in order to get where you are. This means that now you are expected to perform tasks that you were never really good at. Remember the part where you stated that you were a pro at using Photoshop? Well guess what, you have just been assigned to manage designing duties within your team. Good luck!

Just like lies told in everyday life, the lies on your resume eventually get caught. We understand that it makes sense to justify certain shortcomings in career choices, gaps between jobs and even a minimalized skill set. However, you should keep in mind that hiring managers are well aware of the fact that such issues are present in a large proportion of the applicant’s approaching them. What they would rather see, is an honest individual who is not ashamed of his/her decisions and is someone that can be depended upon to undertake the tasks best suited for them.

Like it or not, lying on your resume may get you better jobs quickly, but it would be impossible to keep them for long because of the inability to perform up to the desired level. Being honest on the other hand, would lead to simpler jobs that could lead into developing long-term careers through appropriate training and experience.