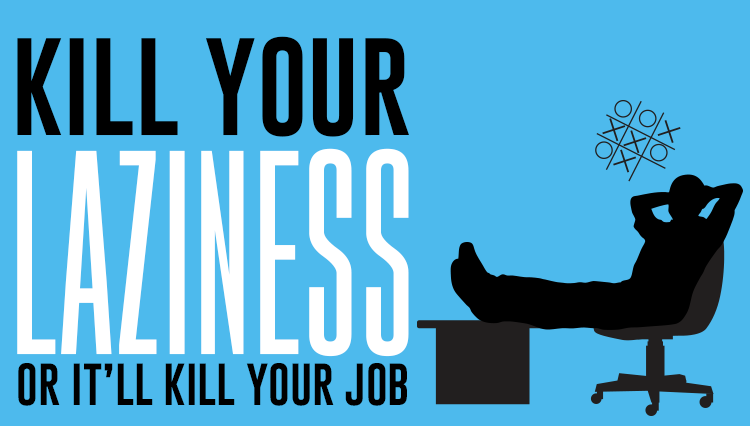 Mistakes or mishaps leading to failure is a natural consequence of things – after all, we’re only human. However, is it the most commonplace reason for our failures? We think not. There is a simpler, and more insidious reason behind our failed ambitions: Laziness.

Today we’re going to identify how laziness kills careers and what to do about it. Yes, this is not the first time someone’s written about “productivity tips to get you off your ass” or “the ultimate to-do list app to defeat your laziness and save your job” and it won’t be the last, but we’ve put forth a concentrated dose of what to do and what not to do. Here’s how to defeat the lazy cycle that’s plaguing your job right now and one day will be the cause of your career’s death.

If the first thing you do when you get to the office is throw down your things on the table and head off for tea/coffee or catch up on “social media”, you’re setting yourself up for an unproductive day. Checking your Facebook or Twitter first thing in the morning, especially, is tantamount to wasting your best hours.

The way to break this cycle is to make it harder to follow your routine. Uninstall social apps from your phone if that’s where your eye goes every morning. Consider having your tea with breakfast or carrying it into the office. Even if it’s just a minor inconvenience, disrupting your usual triggers can create a break in your muscle memory and help you start a new, more positive habit.

Quantify the Developing of a New Habit

Everyone has, at one point or the other, declared that they are going to get more done tomorrow. Inevitably, they don’t. That’s because you’re promising yourself vague and undefined changes, or very large changes very suddenly. The way forward is with small increments, not with huge leaps.

Being lazy is ultimately just a habit and needs to be replaced with a new one. Instead of aiming to not be lazy and doing EVERYTHING, set your sights lower – Assign yourself a task that you MUST do the next day. Perhaps you’ll come in to work 10 minutes early. These small increments will actually bring you significant improvements over time as you break out of your laziness into a more productive habit.

Or to be more blunt, hold yourself accountable. Once you’ve started on this journey, track your progress. The reason behind smaller, incremental changes to your lifestyle and routines is to make it easier to track progress. It’s the best way to stay motivated on those days when your old habits scream for the time of the day. Think of it like overcoming an addiction – every day of progress counts.

Also Check: How to be More Productive at Work

Having proof that all your effort has actually led to less laziness and greater work productivity is all the boost you need to keep going, all the way to that fancy promotion that you deserve (now). And once you have that as the ultimate validation that you’ve accomplished what you set out to do is when you finally kill your laziness and save your job.

How to Deal with a Bossy Boss