Note: The following story is based on an interview between ROZEE.PK and Moin Khan of ‘A Different Agenda’ fame. Snippets of the interview have been reproduced verbatim in quotes, while the rest has been molded to fit a first-person narrative style for artistic purposes. A pure bred Pakistani, born and raised in the hustle and bustle of Lahore, Moin Khan reminisces about growing up in a joint family system with his three cousins. After his schooling at Aitchison, he went on to San Francisco State University to do his undergraduate degree in International Business, after changing his degree about six times in his attempt to figure out what he really wanted.

My dream, when I was a kid, was to become an ambulance driver.

On the chapter of his childhood, Moin Khan reminisced about his love for motorcycles, cultivated as early as the age of five.

“My grandmother was in the U.S and travelling home. She spoke to all the children and asked what they wanted and I asked for a motorcycle poster. She got me 15 posters and I put them all up in my room. If I was in a car with my family and a big bike happened to zoom by, I would ask my father to somehow catch up to him, just so I could shake his hand. I was just a kid with this crazy passion for motorcycles but for the longest time, I didn’t realize I’d be around them as much as I am now.

When I was 11, I stole my carpenter’s bike which had a broken lock and anybody could just kick and go. That was the first ride I took in Lahore, then I just kept borrowing my friends’ bikes; little bikes, big bikes, slow bikes, fast bikes, whatever I could get my hands on.

In the U.S, I started working at a swim school and the first paycheck I got for $1200, I bought a motorcycle for the same amount of money. I had to sell it after a month and a half because I didn’t have money for rent.”

Holding only $500 and a one-way ticket to the U.S at the age of seventeen, Moin Khan put himself through college and never took any money from his parents after that.

I fell in love with Pakistan the day I left.

“When I was in the U.S, a lot of constant negative news kept coming out of Pakistan so without even realizing, I would tell people I was from Pakistan even before I told them my name, in hopes of eradicating media-formed perspectives.

At first, they were scared of me but soon that started to change and we became friends and that is when it hit me; this is what I wanted to do.

I wanted go around and let the world meet a Pakistani and show them that I wasn’t a threat.

I left San Francisco, crossed 22 countries over the span of 6 months, doing 40,000 km; met random strangers, stayed with them and just told them about Pakistan. There are more good people than bad people, in every country, city or slum.

I found out that not only had the media brain-washed the western world, but it had also brain-washed me. I received nothing but love wherever I went and there was not a single negative incident while I was travelling, even though I thought I would face a lot of racism. This is my ambition in life: I want to show the world that Pakistan is completely misunderstood in the West and it is completely safe to be here. On the trip from San Francisco to Lahore, I felt like it was not just a motorcycle ride, it was a lot more than that. It changed me in the sense that I started finding happiness in the little things. Meeting new people and listening to their stories.

When I came to Pakistan, I realized that I had seen a big part of the world but I still had not seen much of Pakistan so I bought an Rs.8000 Vespa Scooter and went up North alone. That trip was really the turning point for me. How the locals took me in when I had no money. They would not charge me for food. Once my scooter broke and this guy stopped and asked if I needed any help. I had lost a bolt. So, he took me to a shop that was two hours away, drove me back and helped me fix my scooter before he could go back to his village that was 20 minutes away.

The hospitality in Pakistan is unmatchable in the entire world.

When this happened, that is when I thought the rest of the world needed to see that.

The main idea was to let the world meet a Pakistani.

Most of the world had only met a Pakistani on TV and for me that was not a correct representation.

Before I made the trip, I sat down on the computer mapping out the 17 countries I would cross but since, I didn’t even have a GPS and used to get lost so much, I ended up crossing 22 countries.

On my trip San Francisco to Lahore, I did not carry a map with me on purpose because when you’re lost, that’s when you meet the most people. So, I would get lost 50 times and that would give me a chance to meet 50 new people to ask for directions.

The hardest part was deciding that I really wanted to do this and when you’re doing something like this, it requires you to make certain sacrifices. When I finished school, I started working three jobs; working at two different swim schools and doing a corporate job for a while. I was working seven days a week, from 5:30 in the morning to 12 at night. I was eating boiled rice and ketchup for 18 months straight. I was sleeping at different family and friends’ houses, I let go of my apartment and sold my motorcycles and even gave away my used clothes at a thrift store.

I was so involved and focused on what I wanted to do that at that time, these things did not look like a very big deal. It made me realize that you can’t get everything in life on a silver platter and that if you are passionate about something, then by all means, follow that dream.

Do not settle for less, don’t just do something because your parents tell you to. Do what you want to do.

I think God has put at least one amazing quality in every human being and our purpose in life is to find out what it is that we truly love. Once you know what you truly love, I think that is the meaning of living life to the fullest. 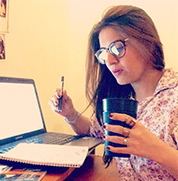 Round the Clock – Amna Saleem