It has often been observed that women in Pakistan are least interested in senior management roles. The reason in my opinion is not the lack of motivation but the unsupportive culture at offices.

A Lahore-based female software engineer is on her way to starting a family however, the fear of sharing this news to her colleagues is keeping the pregnant 31-year old awake at nights. She cannot share this news and her future plans with anybody at her workplace, the reason being, if her boss gets to know this, the young and ambitious lady won’t be getting the expected salary raise this year. Her academic qualification and former working experience make her an ideal candidate for salary raise but her fears about being side-lined are not groundless.

And this is not it! It has been reported by many working women in Pakistan that their marriage or pregnancy announcements also greatly influenced the kind of work that was assigned to them i.e. they were given least important tasks. Working on less important tasks means less chances of getting promoted to a senior management role in future, leading to loss of motivation and ultimately the death of a woman’s ambitions.

This issue is not only faced by working mothers but also by the married females. Recently, while talking to the representative of a local newspaper of Pakistan, a married Pakistani female said:

“I have been married for two years and have no kids. Yet everywhere I apply, the interviewers are like, ‘What if you are to have a baby? We cannot afford to keep you on in such a case. You would only be able to work for like two trimesters’. It is unfortunate that I cannot have a career just because I might have a baby (at some point).”

This makes us believe that the women’s desires to reach the top ranks at work primarily vary by the company, rather than by the family status, as commonly thought. 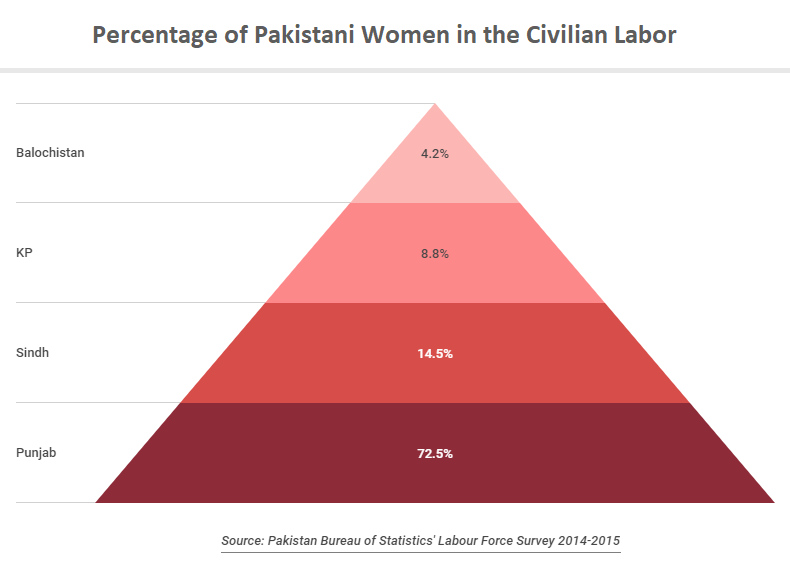 Moreover, if we have a look at the percentage of Pakistan’s total female labor workforce from the year 1994 to 2014, we can see a gradual increase over the span of 2 decades. 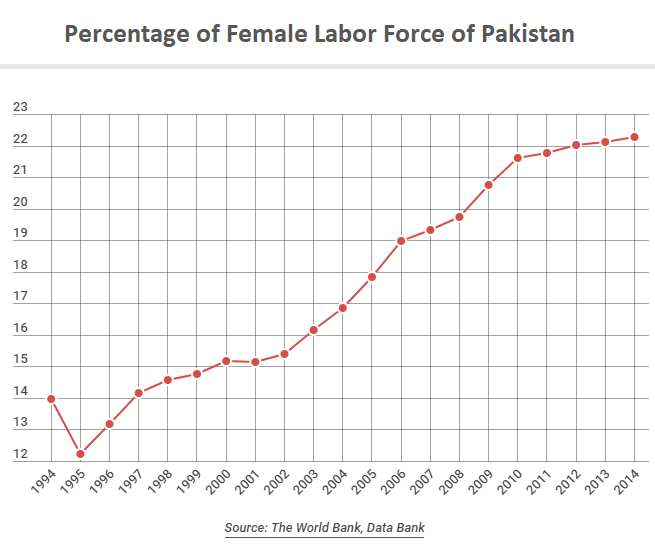 The stats above prove the fact that with every passing year, more and more women are entering the workforce across Pakistan. The question here is why no significant steps have been taken so far by the government to make workplaces favorable for the female workforce in the country?

As reported earlier this year by Dawn.com, at one-third the rate for men, female labor force participation rates are attributed to their higher reproductive burden, mobility restrictions and lower educational achievement, among other factors.

Another report by McKinsey & Company reveals the fact that women are underrepresented across the globe at every level of the corporate pipeline.

What raises concern for women here is that the attitudes in Pakistan have seemingly not shifted much in the last 25 years even as more women enter the urban and rural workspace. As said by late former Prime Minister of Pakistan Benazir Bhutto in her book Daughter of the East:

“Once the political opposition learned I was pregnant, all hell broke loose. They called on the president and the military to overthrow me. They argued that Pakistan’s government rules did not provide for a pregnant prime minister going on maternity leave.”

All the aforementioned discussion takes us to a conclusion that the office culture alone is not responsible for this dilemma; the society as a whole needs to change. If women are to be ensured their rightful status in the society, it is imperative that a forward-looking and dynamic gender policy is put in place, besides of course, strengthening the law-enforcing system.

What are your thoughts on this dilemma? Do share your opinions in the comments section below.

What’s Holding Me Back From My Dream Job?