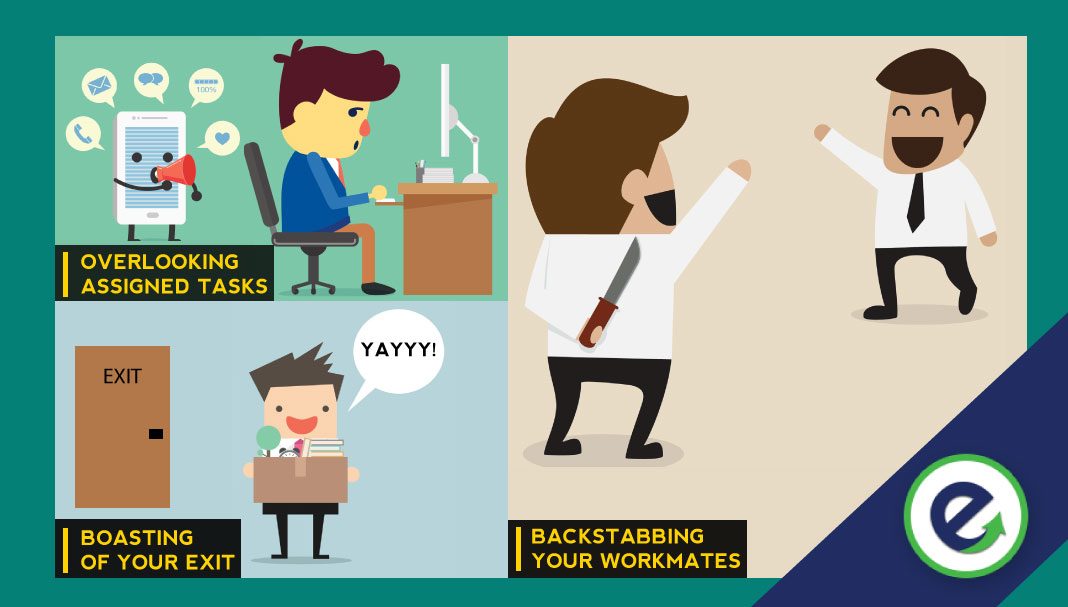 We all know different things people do and say that could get them canned and we also try to stay away from them. These may include cheating, criticizing employer publicly, faking the resume, stealing stuff from the company, disclosing company’s confidential data to others and so on. Since I’ve personally witnessed every one of these behaviors from my colleagues and the resulting consequences during my 14 years of corporate career, I thought to pen them down for the benefit of others.

Backstabbing your boss or workmates

Unfortunately a lot of people speak negatively about others or even attack them behind their backs. This isn’t just an unethical practice but is also extremely detrimental from the career perspective. For many, there’s a key reason that keeps them locked in that cycle. It’s called “triangulation” – a manipulation tactic that’s used when a person is uncomfortable (for whatever reason) about communicating directly with another person about something he or she is upset about. Remember, when you stab someone in the back, it may allow you to vent and alleviate your anxiety immediately but it doesn’t do anything to resolve the issue.

Imagine yourself speaking ill of your boss to your colleagues and having one of those (trusted) colleagues passing it (indirectly or directly) to your boss. Many of my colleagues have gotten into serious hot water (including getting fired) after their negative comments were widely shared in ways that weren’t intended. So make sure to never backstab any of your workmates, whether junior or senior.

Flaunting that you’re ready to walk out the door

I suggest all the professionals out there to keep exploring their career options at least once in every six months, as this is not just eye-opening but also keeps us on our toes. This shouldn’t be taken as a “tire-kicking” exercise but as a way to better realize what’s out there in the job marketplace for you. However, as there’s a difference between interviewing for learning and career growth versus flaunting it as a way to offend your employer. This could restrict them from giving you a raise or promotion or in worst-case scenario, firing you.

So always be careful about how you conduct your interviewing processes, and who you share it with. Moreover, you should strongly refrain from flaunting it as a way to get something you want. If you’re looking forward to an increment, promotion or a favor from your current employer, build a strong and credible case for it and ask for it directly in a professional manner.

It’s is quite common these days for the private sector employees to feel that the work they’re doing is not what they signed on to do. This not just frustrates them but also seeps the morale out of them. If you’re also facing the same, overlooking those (undesired) tasks is never going to help. The best idea is to go to your line manager (or boss if applicable) or HR, share the job description that you were given at the time of hiring and explain how your current responsibilities oppose it. Many professionals handle this scenario in a totally wrong manner and end up worsening the situation. They not just give up and do nothing about those responsibilities but also keep complaining bitterly and revealing how dissatisfied they are in their role.

Over the course of your career, you will end up making mistakes, it’s inevitable. There is, however, a difference between a mistake and a deliberate blunder – one of those is entirely on you and has the potential to cost you your employment and set back your career significantly! Have you observed more examples of such behavior? Let us know in the comments!

Paving Your Way Towards a Successful Career Despite Terrible Grades