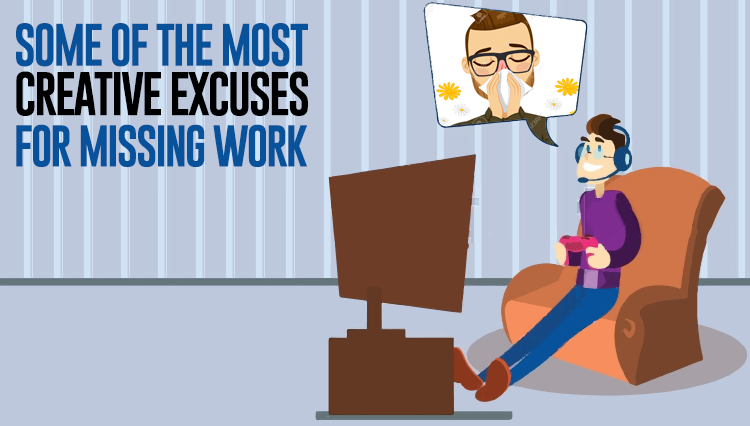 Everyone is entitled to take a certain amount of days off while working within an organization. It is a normal and acceptable phenomena to claim leaves that the company has made available to its employees. Most companies offer casual leaves and sick leaves. Casual leaves, as the name suggests, can be taken any time – unfortunately, they have a tendency to expire once the set amount has been consumed. Now the next best alternative would obviously be to tap into those sweet sick leaves. After all, what are the odds that you would actually end up with a sickness to begin with?

Now some people feel the need to justify their absence in the most creative of ways – perhaps a habit they picked up during their school days. Whether informing HR staff about casual or sick leaves, some employees go out of their way to make their reasons (…stories) for taking the off-day as believable as possible.

We have handpicked some of the most creative explanations that people have gone on to use during such situations and grouped them up because, well because we could.

“Honesty is the first chapter in the book of wisdom”

“No legacy is as rich as honesty”

These are not the inspirational quotes that can be used to explain some of the bluntly honest reasons put-out by employees at times. Sometimes, leaving honesty in a safe place should actually be considered – especially if you are planning on sharing details about your life that no rational person at work would be interested in knowing about. The idea is not to be direct enough to render the truth as being plain awkward – we are not asking you to lie – we are asking you to be slightly more considerate about the truth being told! Some excuses that fall into this category include:

I’ve had a hair dye disaster

There’s nothing worse than blaming the cause of your leave on someone (or something) else – especially if it makes little sense to the listener in question. While anyone responsible for other people is expected to fulfill their duties to the fullest, some excuses can leave others baffled and confused. Consider the following for reference:

Stating that a relative died – for the second time

The Really Odd Ones

Once every now and then, people can actually come up with an excuse to skip a work day which is simply put, bizzare. These excuses are not rude or awkward – they are just too difficult to imagine taking place in the real world. Take the following as an example, keeping in mind that these are, as before, real excuses made by real people.

“There’s a sale today at my favorite garments’ store”

Also Read: Kill Your Laziness or It’ll Kill Your Job!

Why Highlighting Your English Language Skills is Necessary for Growth