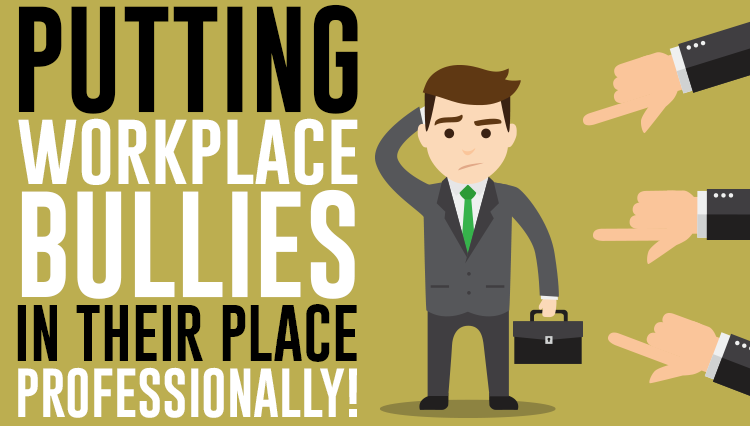 Bullies in the workplace may take a different shape from the ones we once saw in our childhood – swapping messy school uniforms for formal attire, some people can’t seem to help themselves from making their coworkers miserable from time-to-time. Consider the following instances:

Whether intentional or not, these behaviors can make an office environment uneasy, and at times, even hostile for some.

Workplace bullies may engage in various behavioral patterns which center around making others around them feel inferior, agitated or downright awkward. The intentions of their actions focus on putting people down. Being treated in such a manner can be understandably worrisome for many, and despite being grown-up, having a bully on one’s back can never be a pleasant thought in mind.

There are certain strategies to deal with such individuals in a professional way – instead of challenging the bully to a verbal or physical, altercation (as one would during childhood), workplace bullies can be dealt with more maturely.

Step 1: Identify How You Are Enabling The Bully

It may be hard to face the fact that every bully out there exists because someone has, or is enabling them to get away with the way they behave. It is therefore important to identify your own role in this process, and see what actions (or lack of actions) are allowing the bully to continue their questionable antics.

Remember, allowing an action to occur or avoiding to intervene when you could have is almost as good as encouraging it. If you are in a position of power, you become directly responsible for allowing such behavior to take place under your watch – for instance, if a manager observes an employee constantly interrupting other participants in a meeting and fails to address this as a problem, then that manager is enabling the bully to continue offending other people.

Now that you have identified how you may be allowing the bully to do whatever they please, it is time to change that scenario. Questioning workplace bullies is a useful way to help turn the tables on them – if someone constantly bashes your opinions during a meeting without providing any useful insights of their own, you may ask them what they would like to do instead. Putting bullies on the spot can throw them off their game – most bullies in the office want to make their statements and then disappear – push them into the limelight without engaging in an altercation.

Some office bullies may become active if their goals are not being met – they may feel entitled to push others around them until they get what they want, It may be a good idea to ease their level of frustration by asking them how they want to go about achieving these targets, and how you and your team can work differently in order to make that happen.

Bullies are looking for confrontation – they do not expect resolution – surprise them with one!

Finally, set-up the stage to encourage reasonable interactions between yourself and the bully in the future. It is important to lay out certain lines in the form of healthy boundaries, as these would give way to healthy behaviors in the time to come.

Keep in mind that bullying is a behavioral pattern – individuals engaging in these behaviors may not even have malice intentions, they may be acting out personal and/or professional insecurities, or simply be unaware about what their actions seem like to the outside world. It would be a good idea to reasonably remind them.

Also Read: Being Assertive at Work