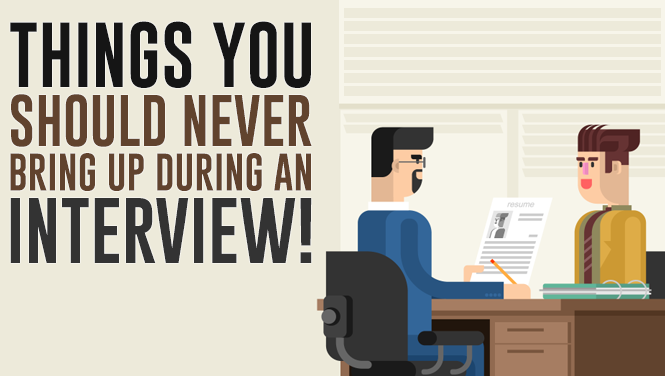 For many people, giving a job interview can become a stressful ordeal. Many individuals often spend a good amount of time and effort to prepare for the occasion – from standing in front of the mirror to practice various scenarios, to going out of the way to ensure that a picture perfect attire can be selected, no room is left for error.

Overthinking comes with its own set of problems – perhaps the most significant one being being not a lack of confidence while speaking, but rather, confidently saying something that should not be brought up. We have enlisted some common interview blunders job seekers end up making.

Also Read: How to Nail a Job Interview

No job seeker wants to fall into what is called the “interview trap” – a scenario where you respond to a job interview question with a traditional, by-the-book response. The whole idea of the interview is to make yourself stand-out and appear positively different than anyone else applying for the opening, and providing a basic, generic or standardized statement during this time would most likely not go well in your favor.

Some common examples of these….common statements are:

“I always get the job done”

Remember – phrases like these, although positive in nature, resemble something anyone can say. Back up these sentiments with reference to your previous personal and professional experiences.

Everyone needs a job, including you – hiring managers are aware that the applicants would be willing to go to extreme lengths in order to prove themselves worthy of the position in question. However, they would be more keen about learning how you can add value to the organization, instead of finding out how badly you need the job. Certain phrases can end up making you sound desperate, and employers tend to avoid hiring people who appear too desperate or negatively ambitious.

Some statements which give a hint of desperation could include:

“I really need this job”

“I’ll work extra hours – I’ll do whatever you ask of me!”

“I’ll take any opening you have, even if it’s not related to what I know – I can learn!”

In contrast to sounding desperate, it is not wise to make statements that make you sound unreasonably demanded either. You would want hiring managers to consider you on the basis of your personality and past experiences – not empty statements which have no structure or evidential backing. Making yourself seem important in such a manner could come off as pretentious or over-confident behavior – basically, no one would take you seriously.

These statements could include:

“You’ll be glad you hired me”

“You can end your search right now”

“I’m the right person for the job”

“This job is perfect for me”

Also Read: Your Hands Tell a Story During an Interview – Make Sure It’s the Right One!