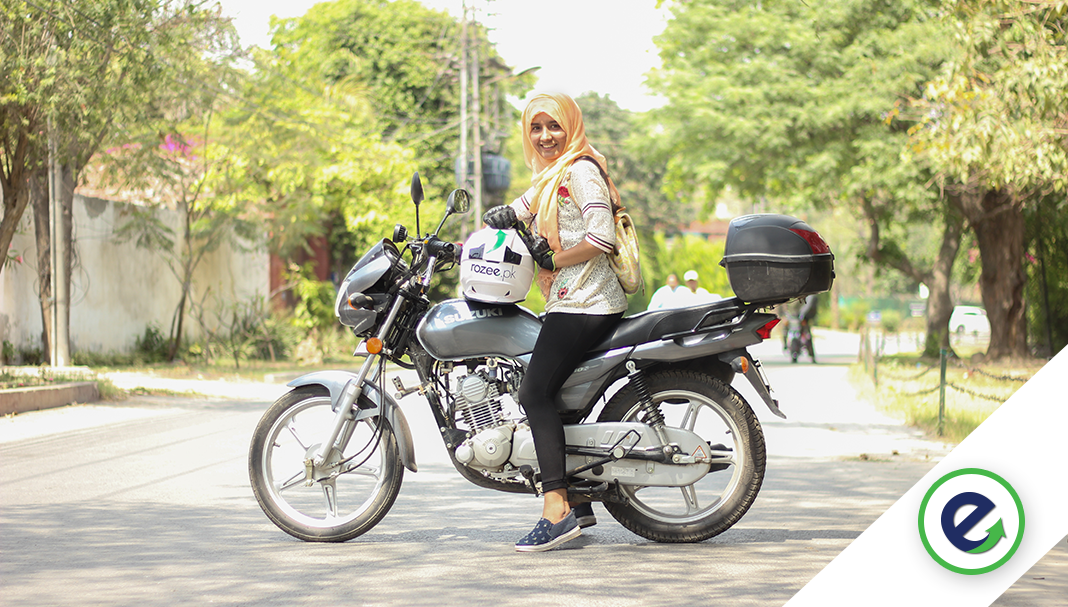 It was back in 2011 when I used to see her every morning on my way to the college. I remember how inappropriately people stared at her while she rode a 70cc motorbike with her kids sitting on the back, all prepared for the school.

Later I discovered that she lived in the street right next to ours. She was a middle-aged widow fighting against the odds, breaking all the societal barriers to ensure quality education and living standard for her children.

This often made me wonder; being a girl, why am I deprived of enjoying this handy and extremely economical mode of transportation without having a million eyes ogling at me?

With the encouragement and support of my parents and by witnessing the example of a biker woman, I decided to fight this stereotype. Fortunate for me, the female sports teacher at my college knew how to ride a motorbike. Thanks to her unconditional support, it’s been six years already that I’m riding my own motorbike, all the way from home to work and back. And this is not all, I’ve also done several successful solo bike tours of northern areas of Pakistan. I’m no longer dependent on public transportation for anything, and above all, I save thousands of rupees each month that I otherwise wouldn’t have, because of motorbike being the most cost-efficient mode of conveyance.

Now that I’ve been given the honor to serve as the brand ambassador for Rozee.pk, the biggest online job portal of Pakistan, I feel it’s a great opportunity for me to voice my opinion on this much needed issue.

It is quite unfortunate to say that socially sanctioned rules define how a woman wanting to travel on a motorbike, in this part of the world, may sit. First, no woman may drive a motorbike or clasp the handlebars with both hands. Second, although fortunately she can be a motorbike passenger behind a male driver, she cannot straddle the pillion seat. Instead, she must perch herself with both legs on the same side and hope she will not fall off. To sit otherwise is considered a violation of female modesty.

As I witness the number of motorbikes growing in millions each year, I always wonder why this matter has not been discussed in any public forum so far. More controversial topics such as family planning, child abuse, and wife-beating have received some attention though. This one has received none.

One thing that’s quite obvious is that the prohibition on driving of motorbikes by women arises from a social taboo. Since taboos are the prohibitions of actions based upon moral judgments or religious beliefs, they lead to discomfiture and, according to our society, must therefore be swept under the rug and never be discussed.

An extremely distressing sight, at least for me, on the Pakistani roads is a precariously balanced woman, sitting to the side, clasps a child or two with one hand. With the other, she fearfully grasps at whatever else she can. On the other hand, her husband’s both hands securely grip the handlebars as he accelerates and brakes through the dense traffic and over pot-holed roads.

It troubles me. I want to ask all my fellow countrymen – are women in this country any different? If driving a car is considered normal for women, how is riding a motorbike any different? When asked, majority of people blame our culture for it. My point is, if it really was the culture, we wouldn’t be seeing women riding scooties in our neighboring country India; they have a culture that is closest to ours. And if not the culture, people would bring in the religion. I don’t claim to be a religious scholar but I fail to see how a woman riding a motorcycle would be against the tenets of one’s faith.

If female bikers are accepted in our society, this would increase their mobility as well as their choices in life, like jobs, shopping, friends, touring, etc. The bitter truth, I believe, is that putting limits on a woman’s freedom to travel was invented by those men who wanted to preserve their power. If a woman is allowed to ride the motorbike, it would seriously challenge the system of patriarchy, a system in which males rule over the females.

The media serves as a stimulus for a lot of acts that people as a society end up doing. So I suggest that the TV channels should emphasize on this much needed issue and show more women riding motorbikes, so that the other women can understand that there is nothing wrong with this. This will also send a much-needed signal to all the conservative men.

Moreover, the survival needs in modern day are now making it impossible to ban women from riding the motorbikes. I’m hopeful that very soon, majority of Pakistani women will be seen sitting naturally on their own motorbikes and holding the handlebars.

What are career conversations and why should you be having them?