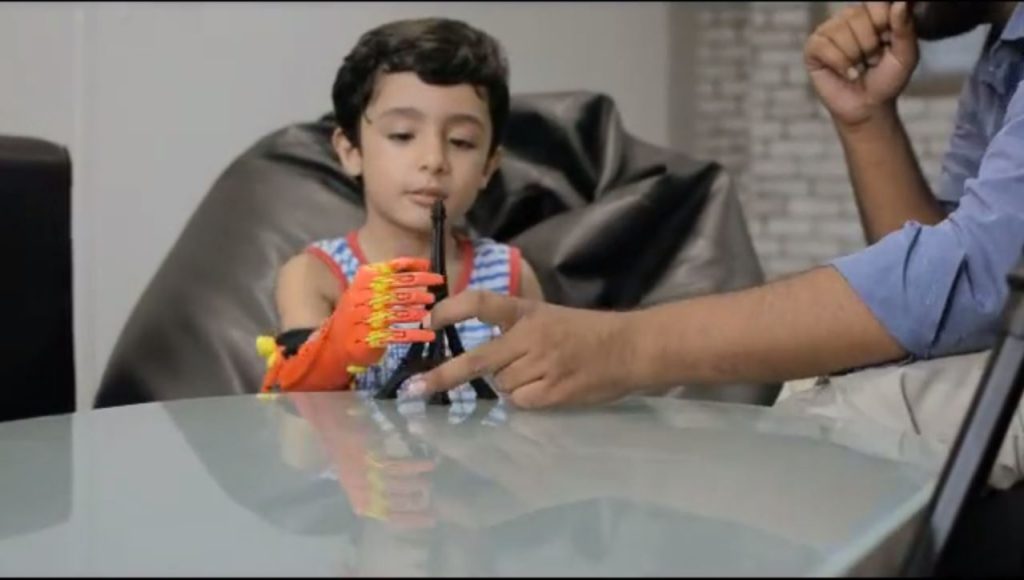 They say you never really know the true meaning of being a parent, until you become one.

For Mir Umer Baloch, the struggle started five months prior to his son, Baiyaan’s birth, when he found out that his son would be born without his right hand.

Undeterred by this news, he did not let this piece of information drown him into a well of hopelessness and worry; instead, he plunged himself into research right away so that his son would never have to grow up without a missing hand. The Mir Umer Baloch case is a classic example of how parents never give up on their children, even if sometimes the children might give up on themselves. If your parents feel that you lack something, they will do anything and everything they can, until you finally possess what you had been missing.

With his optimistic approach and constant perseverance, Baloch continued his extensive search on prosthetics after his son’s birth, and luckily came across Stephen Davies and Drew Murray’s Team, UnLimbited project. The project had an extremely efficient design for an arm available; an elbow-driven prosthetic for individuals with a functional elbow and partial forearm but no wrist or hand, which was perfect for Baiyaan, whose forearm stopped right where the wrist should be.

Baloch found this arm the perfect fit for Baiyaan and decided to get its 3D printout. He got in touch with 3D printing companies all over Pakistan, however, it was not an easy task to find the appropriate one. Everywhere he went, people told him what an intricate job it would be to get a printout with the exact measurements, and that he might have to go to abroad for precise results.

Baloch was fortunate enough to come across a 3D printer manufacturer called Xplorer 3D, who had recently launched in Pakistan and was willing to help. After a couple of visits to Xplorer 3D at NED University of Engineering and Technology to get an exact fitting of the arm, they finally got the measurements right!

Baloch then approached Bioniks, prosthetic providers who eagerly took up this case, and decided to turn it into their special project. The UnLimbited arm was then printed out in orange and yellow, with the help of Xplorer 3D and Viscous.co, a 3D printer retailer. After some adjustments, the device was finally fitted to the five-year-old Baiyaan’s arm, making him the first child in the country to receive a 3D printed hand.

“I think it’s an option worth exploring…”,  said Baloch after he proudly strapped the device onto his son’s arm, and continued,  “If a part of your body is missing and you want to be able to use that part, then 3D printing option is an excellent solution, and one you should definitely try”.

Just like every other five-year-old, Baiyaan can now grip onto things and do the normal things a child should be able to. However, it will still take some time for him to learn how to use this new device attached to his body to its true potential, but he will surely get there after a few more lessons.

Baiyaan’s case, is a stepping stone towards the advancement in the realm of 3D printing technology in Pakistan, making prosthetics not only easily available but affordable for everyone as well. This life altering device has the potential to change the lives of many more children like Baiyaan in Pakistan, and is a powerful initiative for life-altering situations in the future.